Utena Adolfas Šapoka gymnasium was founded in 1996. It is one of the best schools not only in Utena, it is one of the best schools in Lithuania. 792 students attend our gimnasium and 59 teachers work here. There are lot of events and competitions in the school and also there is a dance club, debate club, scholars are writing school’s newspaper "Paupėja", playing in the orchestra, acting in drama class, learning photography, singing in the choir... 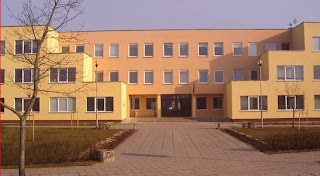 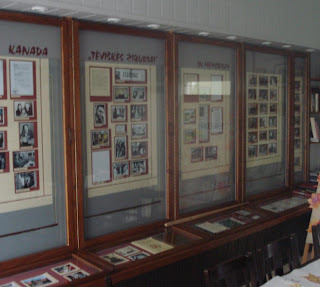 Adolfas Sapoka Memorial room.
Our gimnasium is named after famous Lithuanian Adolfas Šapoka. He was a well-known historian in our country and abroad, too. He wrote the book "The history of Lithuania". We look up to him and have his memorial room. New students of this gymnasium go there to learn more about the person whose name they see every morning, when they come to school. 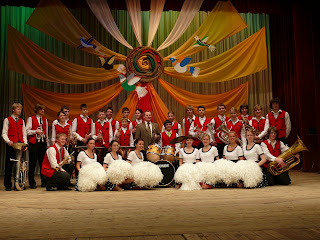 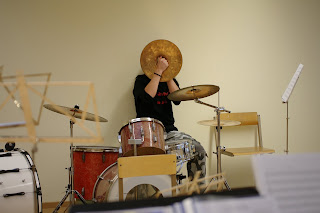 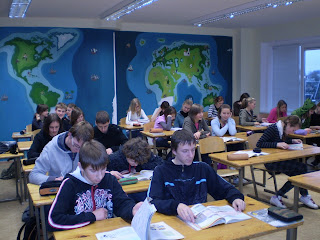 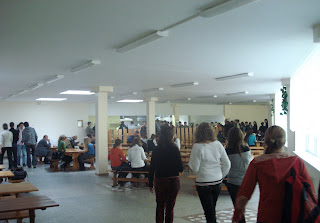 Canteen.
This is our canteen. Here our students spend their free time between the lessons. As you see in the photo, there they can eat, chat or do their homework. It is like our school center. :) School canteen looks very calm in this picture, but it gets really crowded during the lunch breaks. So you have to be very patient if you want to eat and fight for your space or you will go back to the lessons with an empty stomach. It used to be a common complaint, as far as I know, but now everybody seems to be happy about it. You can notice that this canteen is pretty big, other schools in Utena have twice or even four times smaller ones! People who make food are very friendly and funny. 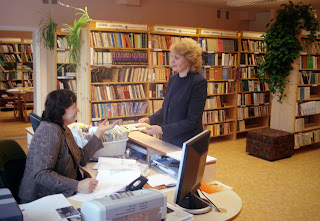 Library.
And this is our most silent place in the school building, it is our library. There students can use the Internet, read newspapers or magazines, they also take some books for reading at home. 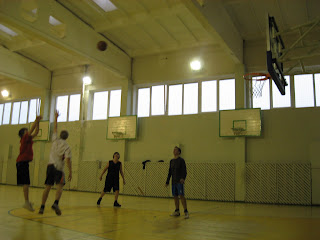 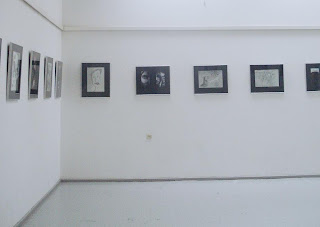 Exhibition hall.
This is the Exhibition hall of our school. Here the students can display their paintings, sculptures or some other works of art which they make themselves. 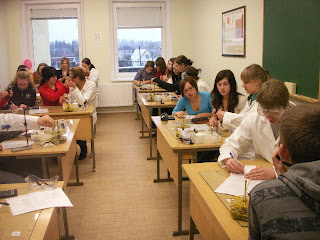 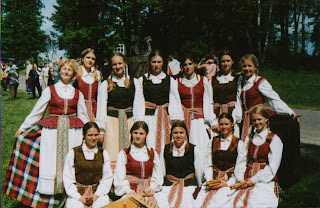 Dance group.
In this picture you can see the beautiful girls of the dance group of our gimnasium. We, as many other schools and gymnasiums, compete in various festivals and show the dancing skills in concerts. Recently there was a dancing festival "Agro 2008" in our school. There were dancers from all over Utena and, of course, our dancers too. 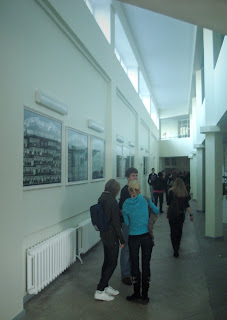 Corridors.
This is one of the corridors. As you see it is quite high and beautiful to look. Also, there are photos of the students who finished our Gimnasium.
Posted by What's up at 08:03 No comments:

And here is another sample, LITHUANIA:

A POSSIBLE VISIT TO LITHUANIA

As we all know, we are trying to make it possible to travel to Lithuania and meet our friends there. If that is finally possible (of course budget is always the point), we believe it id essential to feel the need to know each other. How do we feel that need? Maybe by seeing the wonderful sights, atmospheres and images of one and another country. Here there is one sample, GALICIA:
Posted by What's up at 23:09 No comments: 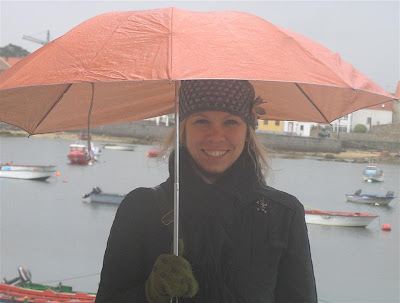 Last year Jolanta Karaliute was an assitant teacher we had at our school (IES Melide) through a Comenius European program. Although this year she is no longer our teacher, she is still ligin and working in Galicia (in Santiago). We meet her from time to time, and decided to make an interview to her. We were really itnerested in how she saw us, her country, and the experience she lived with us. Besides, she is the perfect person to appear on this blog, because she is a "living link" between our two cultures, the Galician (and Spanish) and the Lithuanian ones.Here is the interview. Enjoy it!!

Considering the fact that it’s my second year in Galicia, the answer is obvious – I LOVE it here! I like the people, I enjoy the food, and the constant rain is not as bad as I thought it would be at the very beginning. The Galician landscape is absolutely breathtaking and I honestly believe that Galicia is one of the most beautiful places in the world.

What do you think about Galician people?

I find Galicians very friendly, helpful and considerate towards foreigners. I made some really good friends here, and working with Galicians is always a great pleasure. I like the Galician sense of humour and their self-irony. I also think they are more hardworking than Spanish people in general, which I admire a lot.

Do you think Galician people are morriñentos that is nostalgic, homesick…?

I think this feature is one of the predominant characteristics of the Galician literature and is more common in the rural societies than it is in the cities. People in the cities are more cosmopolitan and I don’t feel “morriñentism” that much. The quality that I will always associate with Galicians is their tendency to reply to any question with ‘bueno…’, for example, ‘Are you cold?’ ‘Bueno…’; ‘Are you hungry?’ ‘Bueno’ etc. J

I do like Galician men as I’ve always been fond of brown eyes and dark curly hair. Although I think men are men, regardless to their nationality... Therefore I couldn’t choose between Galicians and Lithuanians. Los galleguinhos get an extra point for being better dancers than Lithuanians, and Lithuanians deserve a point for… simply being Lithuanians. J

How much do you know about the Galician language? Can you speak it fluently?

I know that it’s a mixture of Portuguese and Spanish, although the intonational patterns sound a lot like Italian to me. I understand most of it, but I’m far from being fluent. Occasionally I speak Galician with my friends just to have fun, but that’s pretty much it.

What places have you visited in Galicia?

I’ve been on several tours around Galicia, so I’ve seen almost all the parts. I’ve visited the most beautiful places on the Galician cost, starting with the Playa de los Catedrales in the North, and finishing with Muiños in the very South of the province of Pontevendra. I’ve been to La Coruña countless times, also to Ferrol, Pontevendra, Vigo and Lugo. I’m a big fan of Ourense and its pleasant climate. Also, Ribeira Sacra and Cañones do Sil are some of my favourite routes in Galicia.

I cannot choose just one dish. I really like pulpo and pimientos de Padrón. I think cocido de Lalín is exceptional and any Lithuanian would love it. People say the Galician empanada is the best you can find in Spain and I totally agree with that – I love it!

I like to listen to it live. There are some places in Santiago where they have live performances, and there is a band called Tuna de Derechos de Santiago that sometimes plays in front of the Cathedral.

I do live here, don’t I? J Sometimes I consider staying here for good, although I think that eventually I will go back to Lithuania. But for the time being I’m really happy here.

Have you ever been to other places in Spain? Which city? Did you like it?

Yes, I gave Madrid and Barcelona a short tour, visited Salamanca several times, and went on a tour along the Northern coast of Spain. I stopped in Bilbao, Santander, Gijon, and Oviedo. I also went to many little towns and villages in between those cities and to Los Picos de Europa. I liked all the places for different reasons, I could talk about it for hours…

Is Galicia similar to Lithuania?

I think the cuisine is similar in a way: Lithuanians eat a lot of pork. Interestingly enough, all body parts of a pig are edible in Lithuania so nothing goes to waste, just like in Galicia. The ways of preparing it are different, of course, but I think you wouldn’t die from starvation if you came to Lithuania some day. J

Other than that, Galicia and Lithuania are quite different.

Is that a trick question? J I told you all about it during the Lithuanian Week last year! I even showed you pictures and videos! Lithuania is like sugar and spice and all things nice! ;) Come and see it yourself!

Which is the best season to visit Lithuania?

My favourite season is summer, but Lithuania is really beautiful in spring (end of April, beginning of May) when everything as green and all the flowers are blooming. Autumn can be good too – I really like the bright scenery with the trees changing colours.

What places do you recommend us to visit in Lithuania?

First and foremost, Vilnius, the capital of Lithuania. Especially this year because it is the cultural capital of Europe, so there is going to be a lot of concerts and other cultural events all year round. Then, Kaunas, which is the second biggest city of Lithuania. You also have to go to Klaipėda, which is the main Lithuanian port, and to the Curonian Spit where you will find some of the most beautiful beaches on the Baltic coast. You must stop at the Hill of Crosses on the way to Klaipėda. It’s the only one of its kind in the world!

What are Lithuanian people like? Are they similar to Galician people?

People say that Lithuanian women are really beautiful and men are very talented basketball players. Although generally speaking Lithuanians are kind, friendly and hospitable. We like learning foreign languages and discover new things about different cultures. My best friends are Lithuanians, and I think they are some of the most trustworthy and sincere people I know. They are a lot of fun too!

What do you think about our project? Do you think it is interesting? Why or why not?

I can only say good things about this project. I always tell people that seeing is believing. The things you will discover if you really get to go to Lithuania will be more valuable than any information you can find in books or on the Internet. You can ask me thousands of questions about Lithuania, its people and its culture, but it takes one to really go there and see it for himself. The project you’re taking part in is giving you the possibility that most teenagers in Spain or in any other country don’t have. And most importantly, you will make new friends and that’s one of the best things anyone could expect from a school project! Good luck to you all!
Posted by What's up at 22:36 No comments: 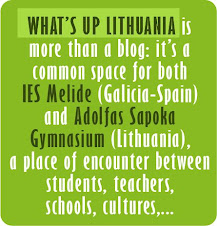